A hundred years before Silicon Valley became a household term, innovation history was being made in Brooklyn, New York. At the turn of the 20th century on Coney Island, an incredible invention was unveiled to the public that would change the way we move about the world forever: the first escalator. Whether curved escalator or spiral escalator, outdoors or extremely long, the ubiquitous people movers we take for granted today have a fascinating history that stands as a shining example of early tech disruption. URBAN HUB takes a look back in escalator time, but also at some new technological developments that may be coming soon to an escalator near you.
Tower running takes off

Smart cities, Christmas markets
Previous article
Next article
Cities
Smart inside and out – In many ways, the smart city concept is simply good urban planning that incorporates both advances in digital technology and new thinking in the age-old city concepts of relationships, community, environmental sustainability, participatory democracy, good governance and transparency.
8306 views

Since those brave first few riders wobbled hesitantly onto Jesse Reno’s early escalator prototype on Coney Island in 1896, escalators’ efficiency, flexibility, and longevity have fundamentally changed the way we move around in urban spaces.

Today, escalators are more than a side show; they also play an integral role in keeping our consumer economies working smoothly. A broken escalator can mean missed trains or work appointments, and studies have shown that a broken escalator in a shopping mall can wreak havoc on upper-floor sales.

Like with every major innovation, transforming the escalator from an idea in its inventors’ minds to an accepted part of day-to-day life required a hurdle greater than just securing the right patents. Getting humans to buy into the idea of a self-climbing staircase took some work of a different kind.

The first member of the public to ride Reno’s escalator prototype on Coney Island actually had to be nudged (read: physically pushed) on. Early users of England’s first escalator, unveiled in 1898 at Harrods in London, were known to become dizzy or even pass out from the experience, with sales associates at the ready with “smelling salts and cognac” to revive them.

Taking it to the next level

It wasn’t long before the hesitant masses were won over by the versatility, usefulness, and ease of the escalator. By the time a working model was showcased as a means of aiding foot transportation at the Paris Exposition Universelle in 1900, it was all anyone at the event was talking about.

As escalators started to become more common, everyone wanted a piece of the patent pie. Inventors tinkered away at different models, each one more fantastical than the next. Manufacturers, vying for market share, introduced new variations such as the curved escalator, and Motorstairs, Moving Stairs, and Electric Stairways. 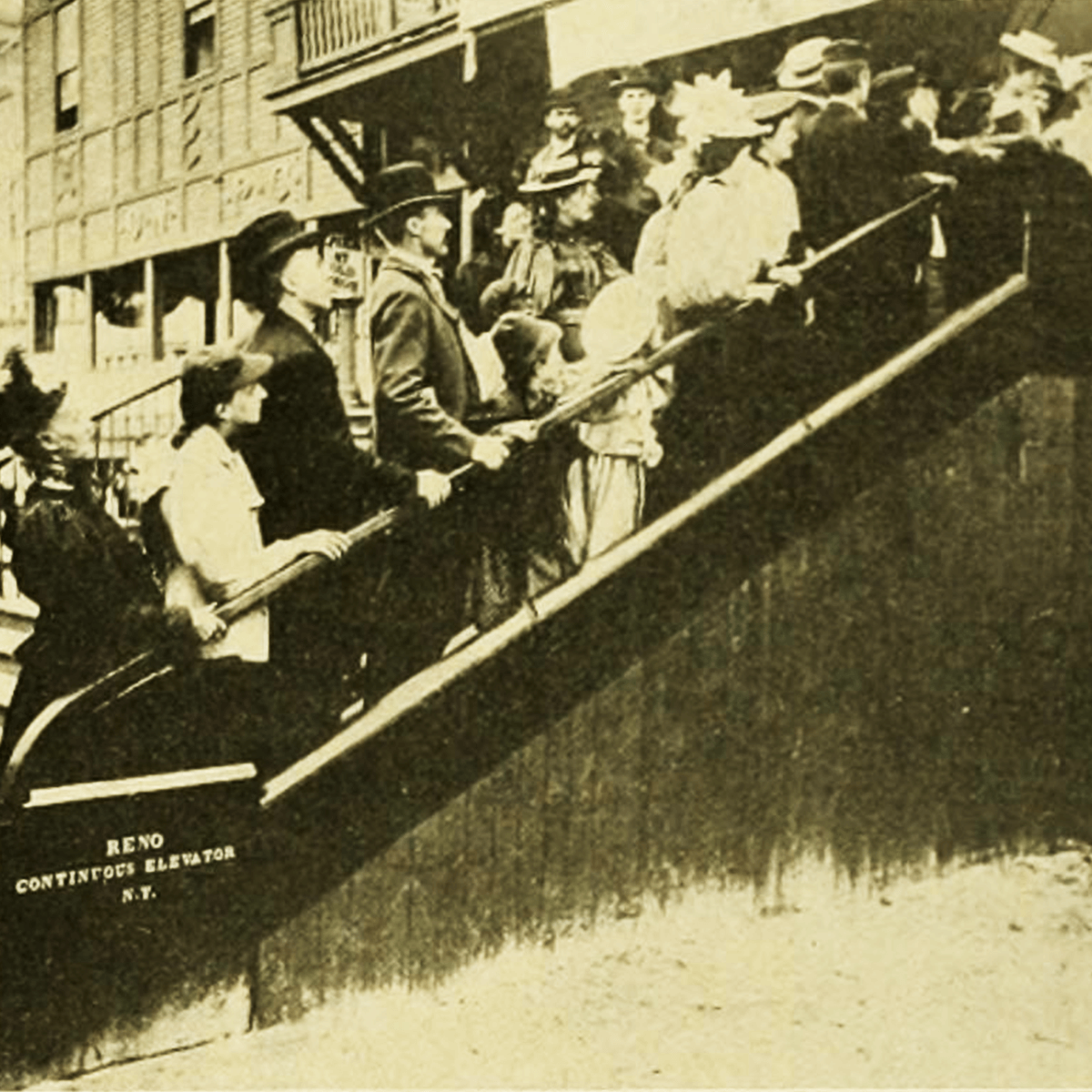 Since those first big strides, escalators have evolved significantly, in some cases mirroring the goals of those early prototypes. They have been tailored to a wide array of different spaces for practical reasons and installed in innovative ways – like the bespoke spiral escalator in The New World Daimaru Department Store in Shanghai – as an eye-catching element.

The longest thyssenkrupp escalator in the world reaches down into the depths of Okruzhnaya metro station in Russia, which by necessity runs underneath the Moskva River and the swampy soil beneath it. Without this escalator, Russian commuters would have to climb nearly 300 steps just to exit the station. Talk about an urban workout!

Today’s modern escalator is becoming a model of streamlined energy efficiency and reliability. Thanks to reduced power consumption, predictive maintenance, and LED lighting in escalator models like the Victoria, escalators are safer – and less likely to break – than ever before.

Finally, another exciting “people mover” ACCEL, a flexible and efficient solution that is shortening distances in a variety of urban spaces and buildings. 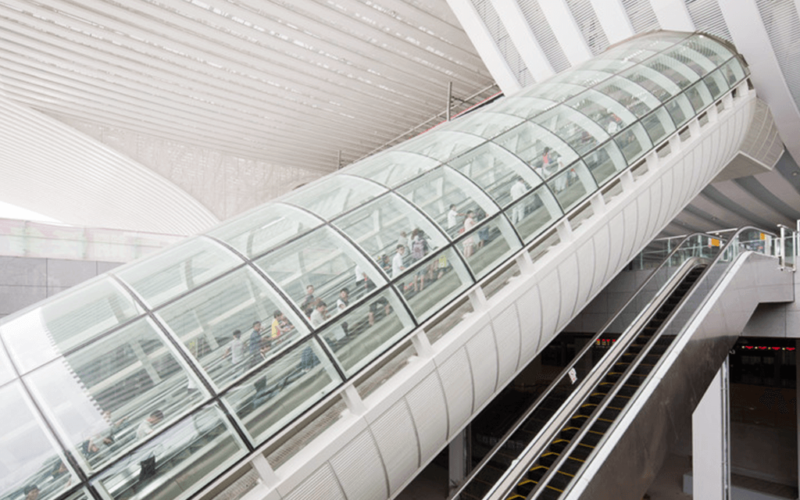 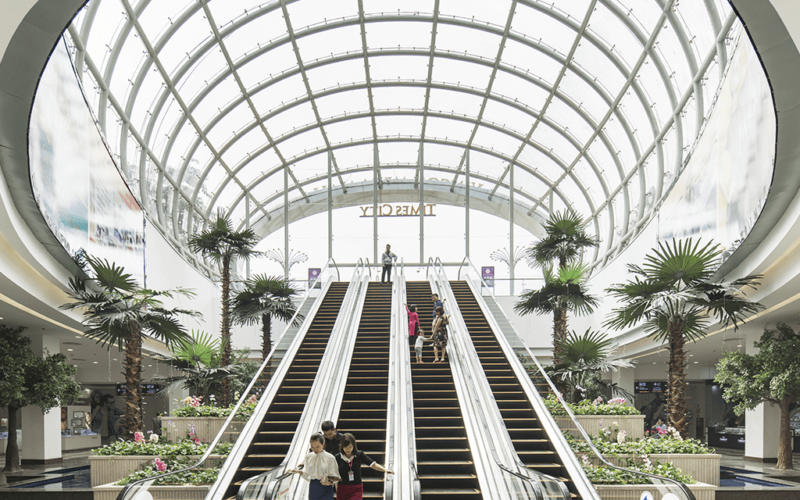 The Great Debate – What is the proper way to ride an escalator?

In different cities around the world, you can spot different approaches to riding an escalator. So, is there a right or wrong way?  If you are a parent traveling with a small child, safety and holding hands may be at the top of your mind.

Many people follow the “Stand Right, Walk Left” approach. However, escalator technicians point out the majority of escalator wear-and-tear is caused by the resulting uneven weight distribution. Plus, most people want to stand, and if passengers stand on both sides, it increases capacity by 30%.

Habits are difficult to change, especially as many people worry it may seem rude to stand on the left-hand side. Campaigns in London, Nanjing, and Japan have so far been unsuccessful in changing the pattern of flow. Perhaps a new innovation or feature is in the works!

Here’s to another 125 years

The escalator is such a staple of city living that it can be easy to forget the push initially required to introduce it into day-to-day life. After 125 years, a look back on the escalator’s history has revealed a triumph of urban life and our capacity for change. 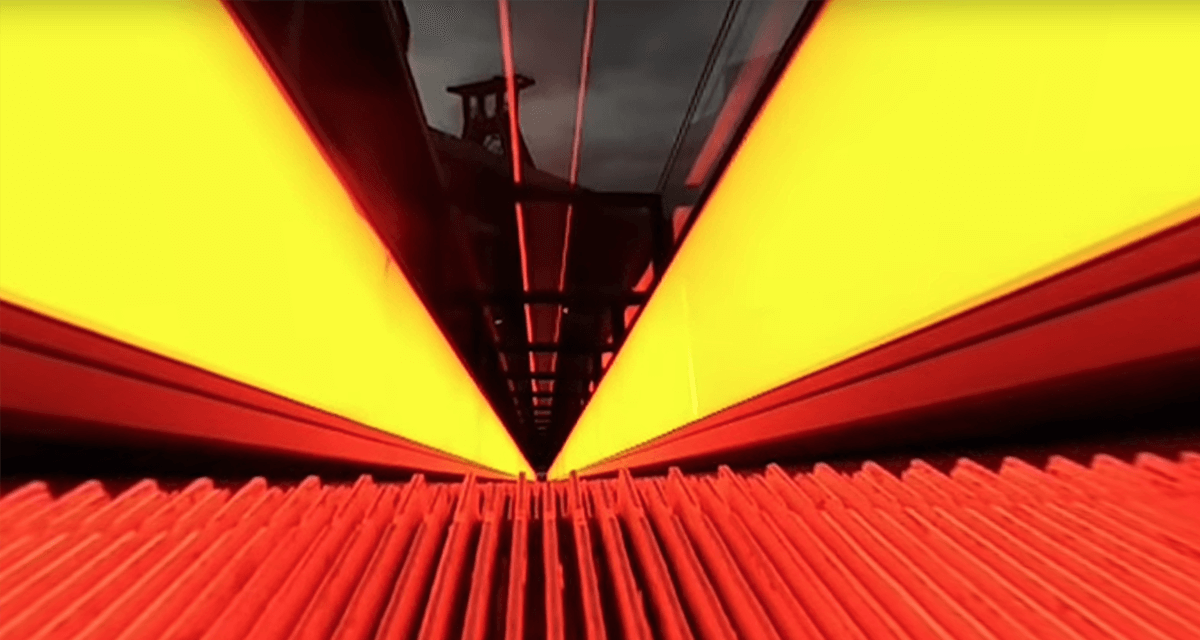 The escalator of the Zeche Zollverein