Cities of the future: what will urban living look and feel like?

In the future, cities may see flying vehicles, mega bridges, super-connected street experiences, and underground spaces. Those futuristic cities will be powered by big data, the Internet of Things, and artificial intelligence – so they may live, breathe, and even think with us. But other aspects of the futuristic city include sustainable, inclusive, and mixed-use. Technology will also be used to create a new quality of life in well-planned developments that don’t lose the human touch. URBAN HUB checks out some future-ready projects happening in cities around the world.
Construction in Moscow

Previous article
Cities
Smart inside and out – In many ways, the smart city concept is simply good urban planning that incorporates both advances in digital technology and new thinking in the age-old city concepts of relationships, community, environmental sustainability, participatory democracy, good governance and transparency.
38707 views

Build down and underground

Space is of the essence, but also low energy and building costs. Underground structures cover it all. How? They eliminate the need for foundations, which cuts construction costs. Plus, the temperature remains stable, reducing heating and cooling bills by up to 80%. Subterranean construction may also prove more resilient in locations where natural disasters prevail.

Who’s already building down? Singapore provides an inspiring example. From data centers and utility plants to warehouses and bus terminals, this city-state has figured out how to make the most of going below street level.

Helsinki aims to keep its carbon footprint down and its skyline low. The Finnish capital has been developing a subterranean city with shopping centers, metro stations, swimming pools, as well as one of the world’s greenest data centers. 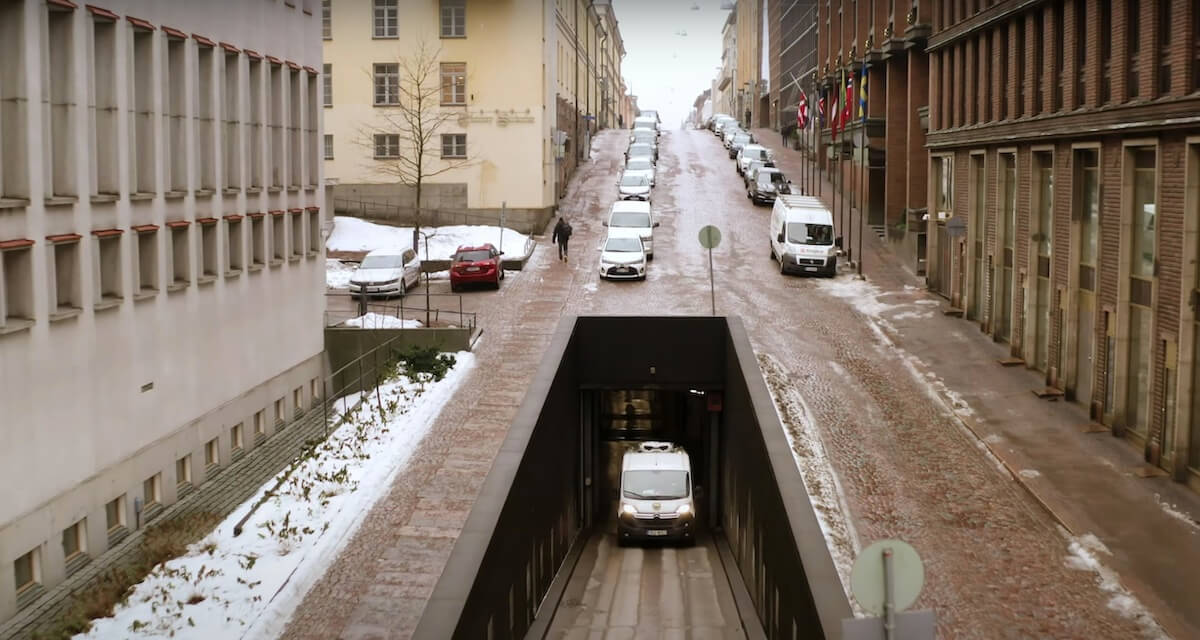 Tunneling to the future

Let’s not forget tunnels of the future. In Kuala Lumpur, the Stormwater Management and Road Tunnel blends underground highways with flood control. When the monsoon season arrives, the bottom deck of the highway is converted into a drainage channel to divert water away from the city in the event of flooding.

What’s even more exciting? Transportation through tunnels will boom. Boring technology is much faster and cheaper today so the city of the future will see more solutions, such as plans in London for a subterranean network of tunnels that could ship 600 million packages a year.

The above-ground tunnel travel system “hyperloop”1 may come to a city near you in the next four to five years, with projects being proposed in India, Dubai, Abu Dhabi, Las Vegas, and Switzerland. Swisspod is developing a hyperloop system that could transport passengers and cargo from Geneva to Zurich in 17 minutes. 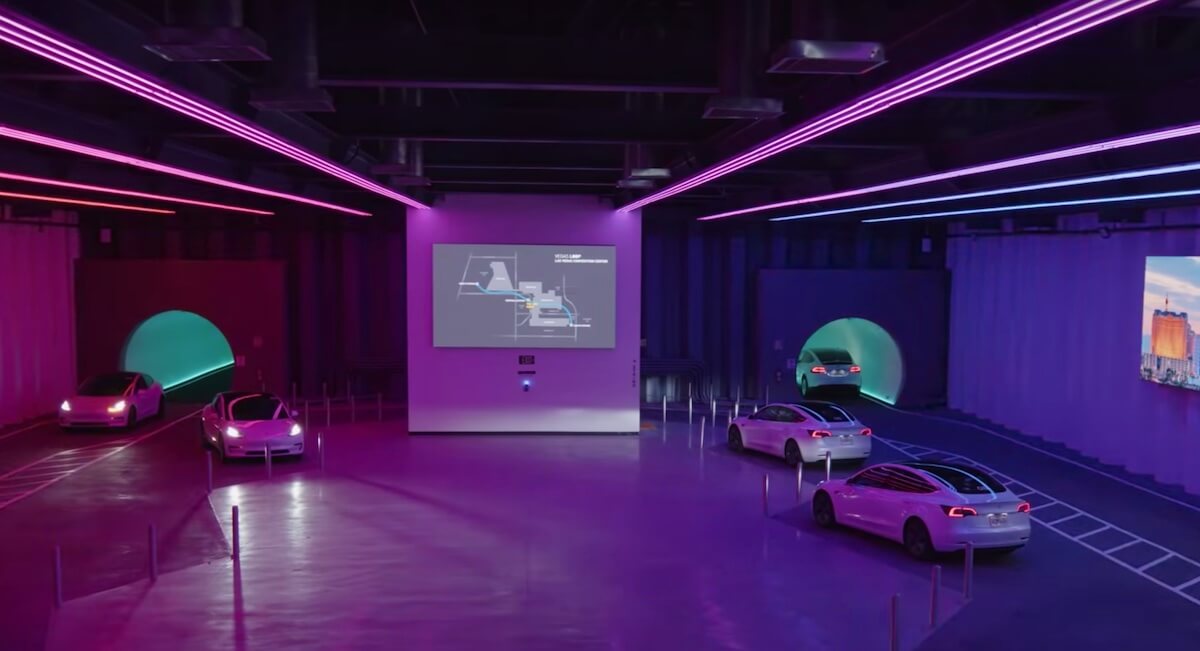 Bridges to the future

The bridge of the future will do more than connect two points. An exciting example is under construction in Washington, D.C.: the 11th Street Bridge Park is set for completion in 2024. It will offer everything from an amphitheater to a boat launch, as well as pedestrian and bike lanes across the Anacostia River.

The skybridge is also attracting attention. While some spectacular examples like a swimming pool2 between two towers in London capture the imagination, skybridges offer practical solutions as well. Future cities will see more so-called “enclosed programmatic” skybridges that house offices, and restaurants, like the Linked Hybrid Building in Beijing.

For residents to seamlessly access the different levels and mixed-use areas, cities will increasingly rely on innovations like MULTI, the first ropeless elevator that doesn’t just go up and down, but left and right, too. 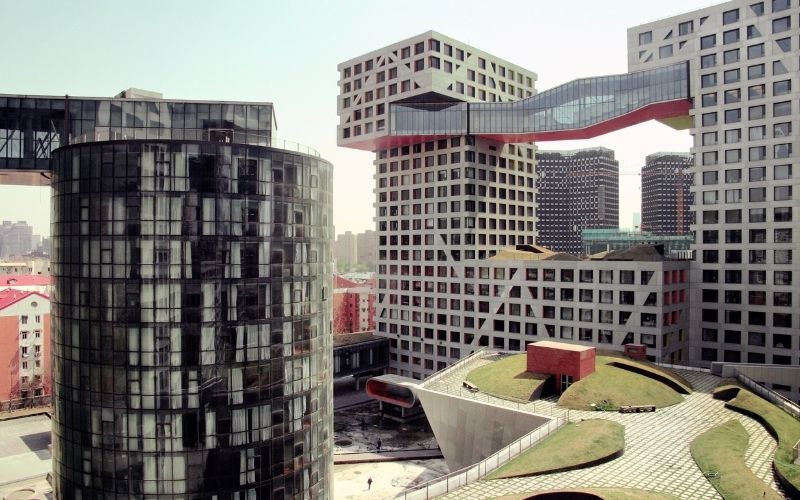 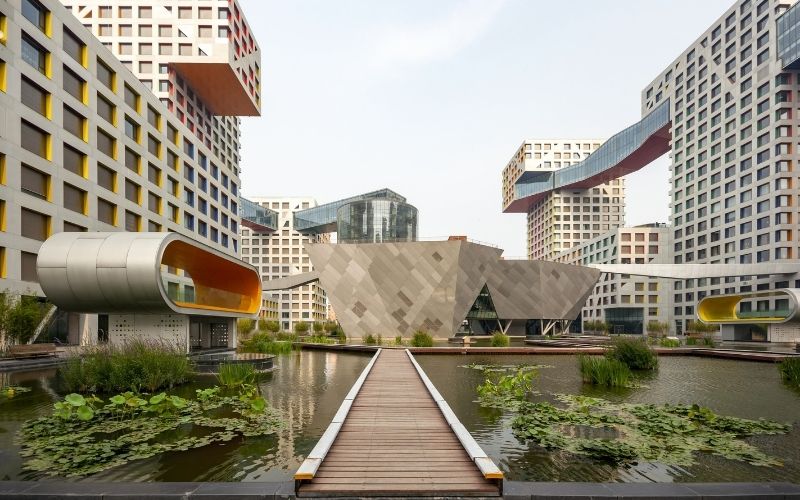 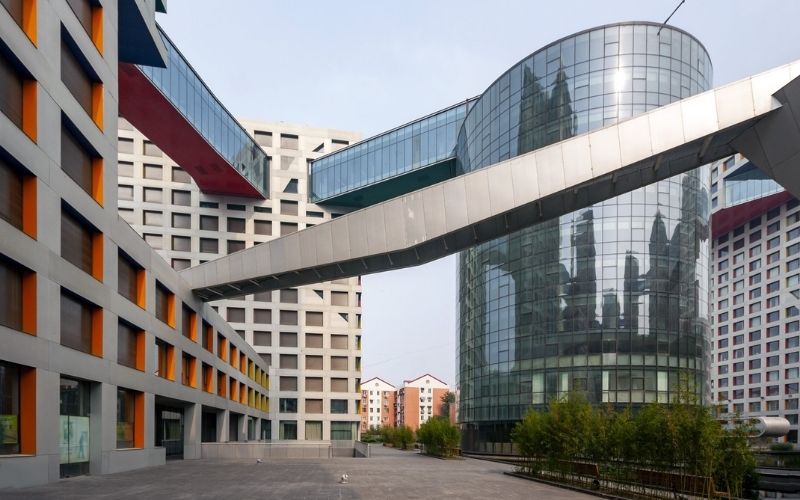 The world’s first rope-free elevator for high-rise buildings – moving both vertically and horizontally.

The future city mixes it up

Mixed-use development is the future of the city. Toronto’s ambitious Sidewalk Labs is already making this case. These developments rely on modular building systems that bring together residential and commercial living with public facilities and parks.

They create shared environments that are more amenable to integrating sustainable and energy-efficient building innovations. For example, they can run on their own micro-grid that uses on-site renewable sources. The flexible construction can evolve with the city’s changing needs, doing away with the dynamic of constant tearing down and rebuilding.

Mixed development can be found in all shapes and sizes. In Medellín, Colombia, they also demonstrate a way to bridge different communities. The Library Parks, for example, are multi-use spaces that bring people from diverse neighborhoods together to create a new urban hub. 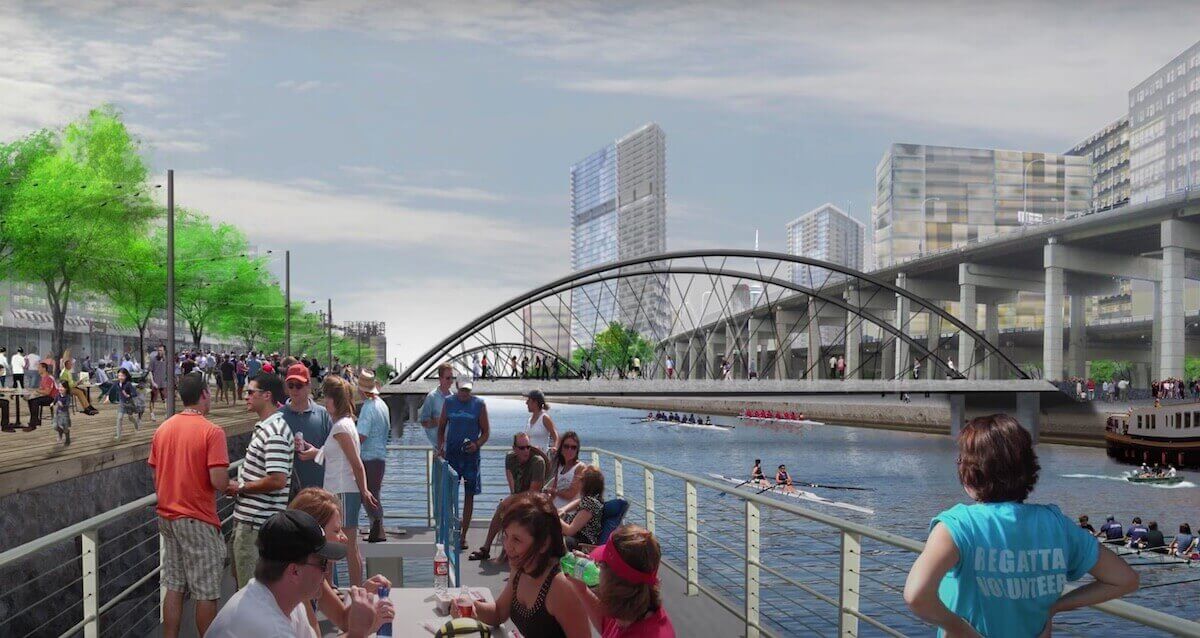 The streets of the future city are smart

Big data will continue to be analyzed to enable more proficient use of city services, streets, and public transportation. One good example can be found in Los Angeles, with streetlights that react to what’s going on around them. For example, if a crowd is leaving a stadium at night, the lamps may brighten to light the way – or flash to warn of an incoming ambulance.

The advances in Low Power Wide Area Networks and 5G will provide better connectivity over a vast number of devices and long distances. Urban apps will merge with alternative reality (AR) technology to make intelligent, personalized suggestions for a highly intuitive urban experience. 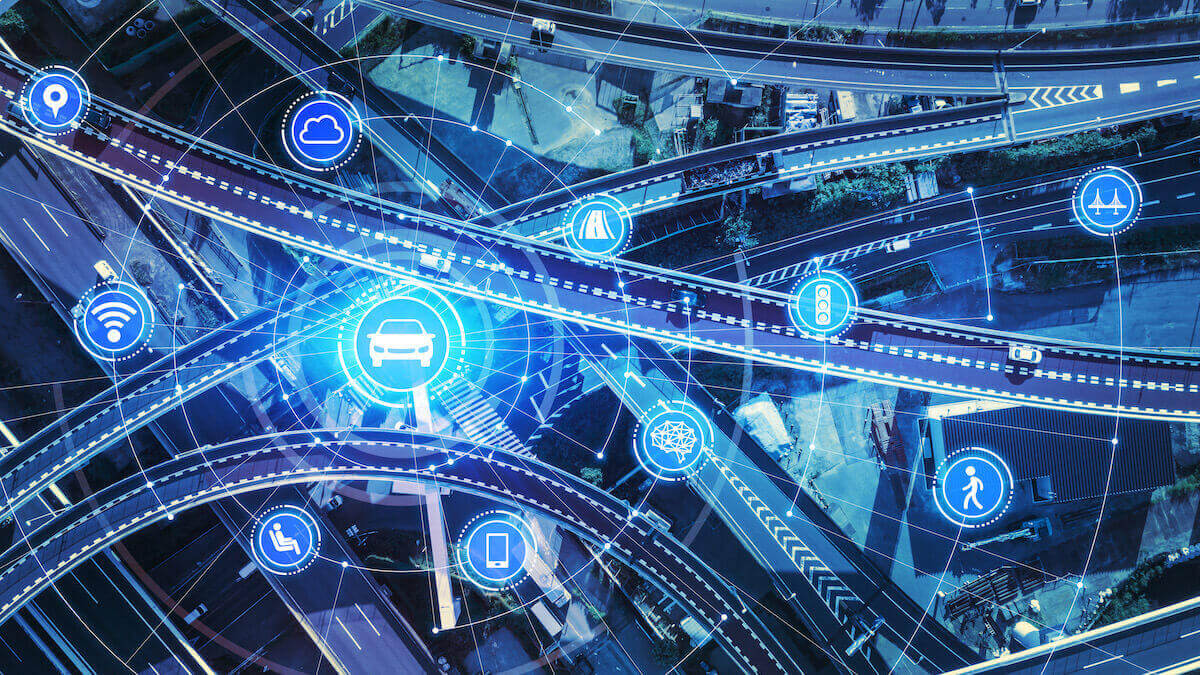 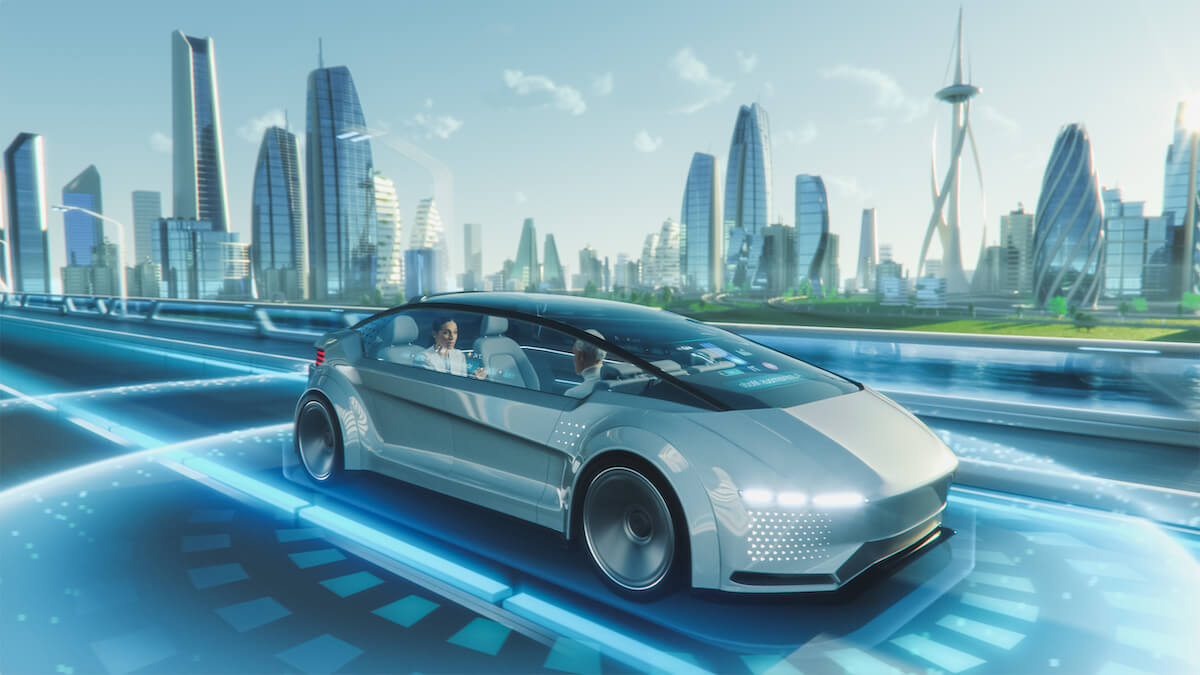 The future is mobile

The city of the future will undoubtedly have fewer cars and more autonomous, self-driving vehicles. Residents will rely on vehicle shares and public transport pods that can be called via an app. The future city will be one for walkers and bikers with solutions ranging from moving walkways to underground and even above-ground bike lanes.

And the next generation of public transportation? The flying vehicle. Small-sized eVTOLs — electric vertical takeoff and landing vehicles – with the agility of a helicopter and the size of a car are currently under development by companies like Uber Elevate. 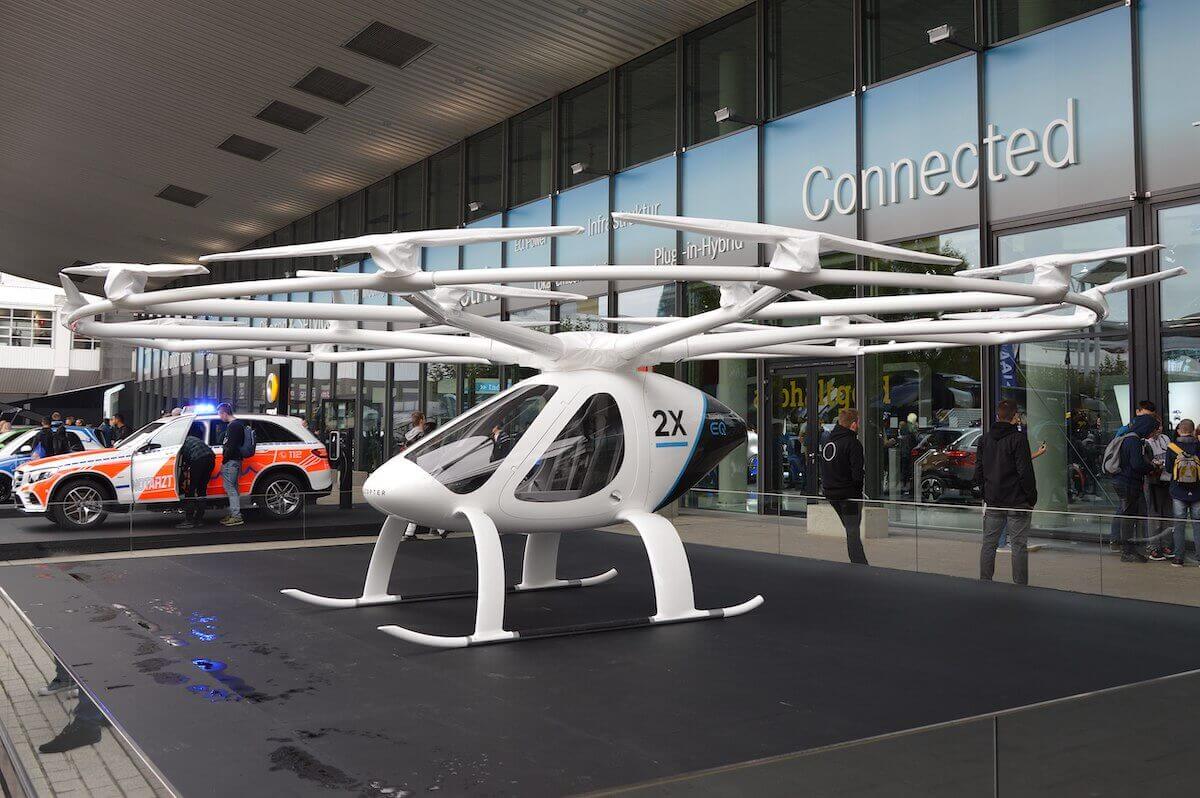 The future is urban

While some projects for the future city like flying vehicles and underground buildings may sound like something out of a science fiction novel, most ideas arise from a very down-to-earth commitment to maintaining sustainability, livability, and community in the places that will be home to much of the population by 2050. 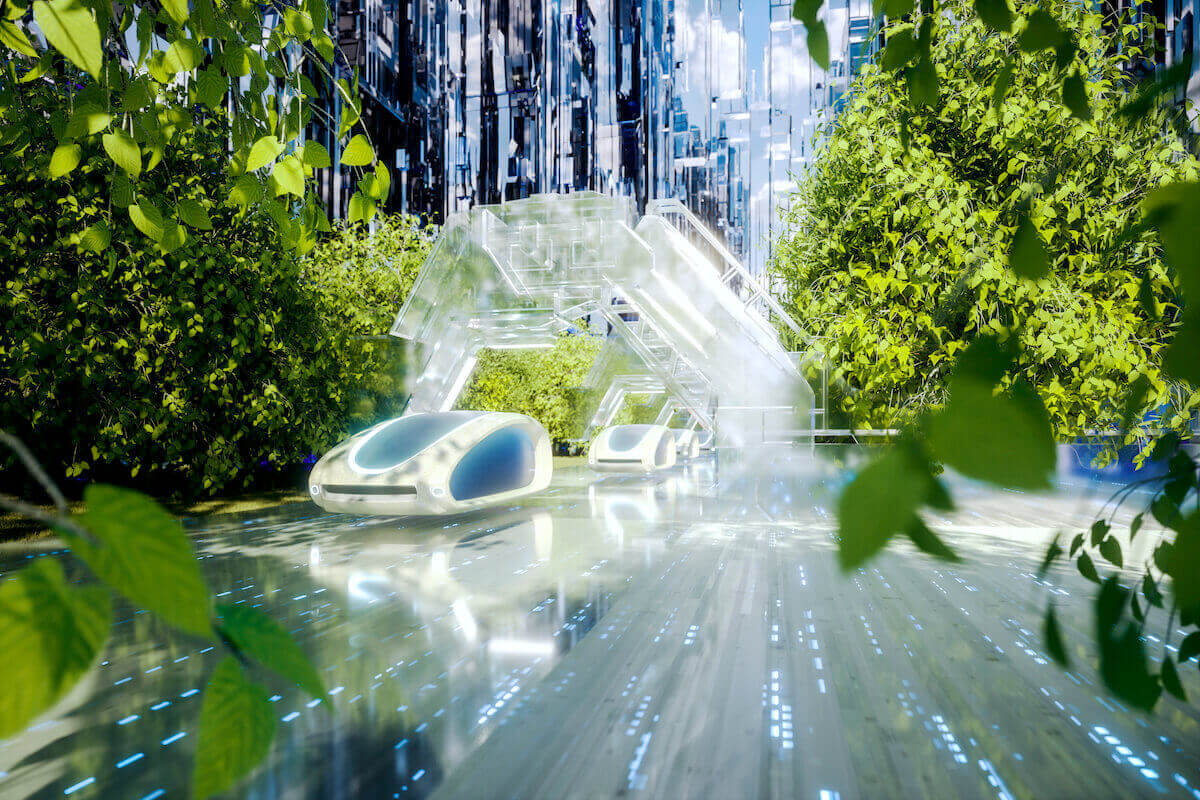 Volocopter at IAA 2017 1, image by Spielvogel, taken by Wikimedia Commons