What should modern cities offer to people? What are some of the most important factors that determine a city’s success? Believe it or not, ancient cities have many of the answers. Consider this: ancient cities were built primarily for people, not cars – some ancient cities barely made room for horse-drawn carriages. The “design for people, not cars” ethos of modern urban planning could, therefore, be considered a mere continuation or revival of ancient design principles: keep everything within walking distance, design for beauty, ensure safety, and provide for social interaction with gathering points.
History of tower running

Top New Year’s destinations
Previous article
Next article
Cities
Smart inside and out – In many ways, the smart city concept is simply good urban planning that incorporates both advances in digital technology and new thinking in the age-old city concepts of relationships, community, environmental sustainability, participatory democracy, good governance and transparency.
12462 views

For the purposes of this article, we’ll define “modern” as “existing today” (rather than the historic early and late modern periods of 1500-1945). “Ancient” will be defined as any time prior to the end of the Middle Ages (i.e. before 1500).

First and foremost, it is important to recognize the huge difference in scale between modern and ancient cities. Whereas today we have almost 50 megacities with well over 10 million inhabitants, only 7 cities reached the 1-million mark in the ancient world.

But despite their size differences, ancient and modern cities are actually quite comparable in terms of how they grew and what they offer citizens. In fact, according to recent research1, ancient Meso-American cities showed similar growth patterns to modern ones, following the so-called urban scaling model. As cities grow, people tend toward denser and more concentrated living rather than spreading out. Also, in the past as today, humans become more productive and more efficient as the population increases. 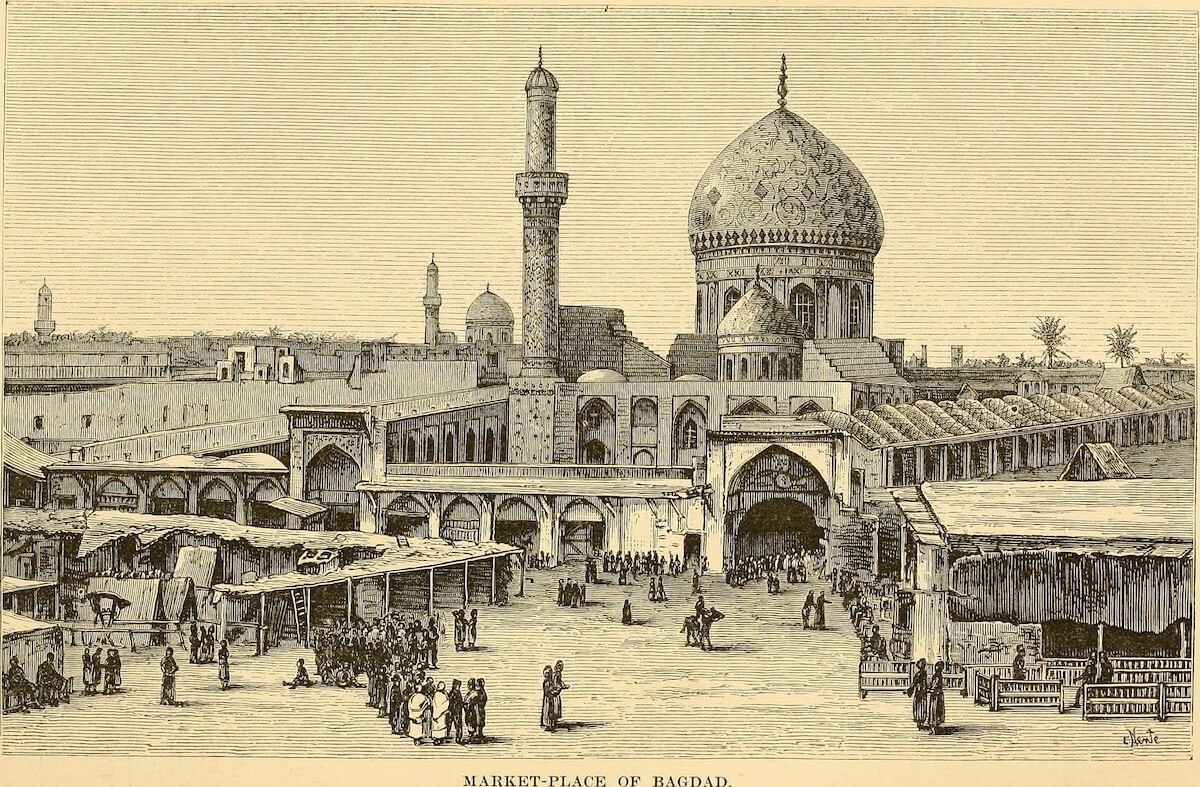 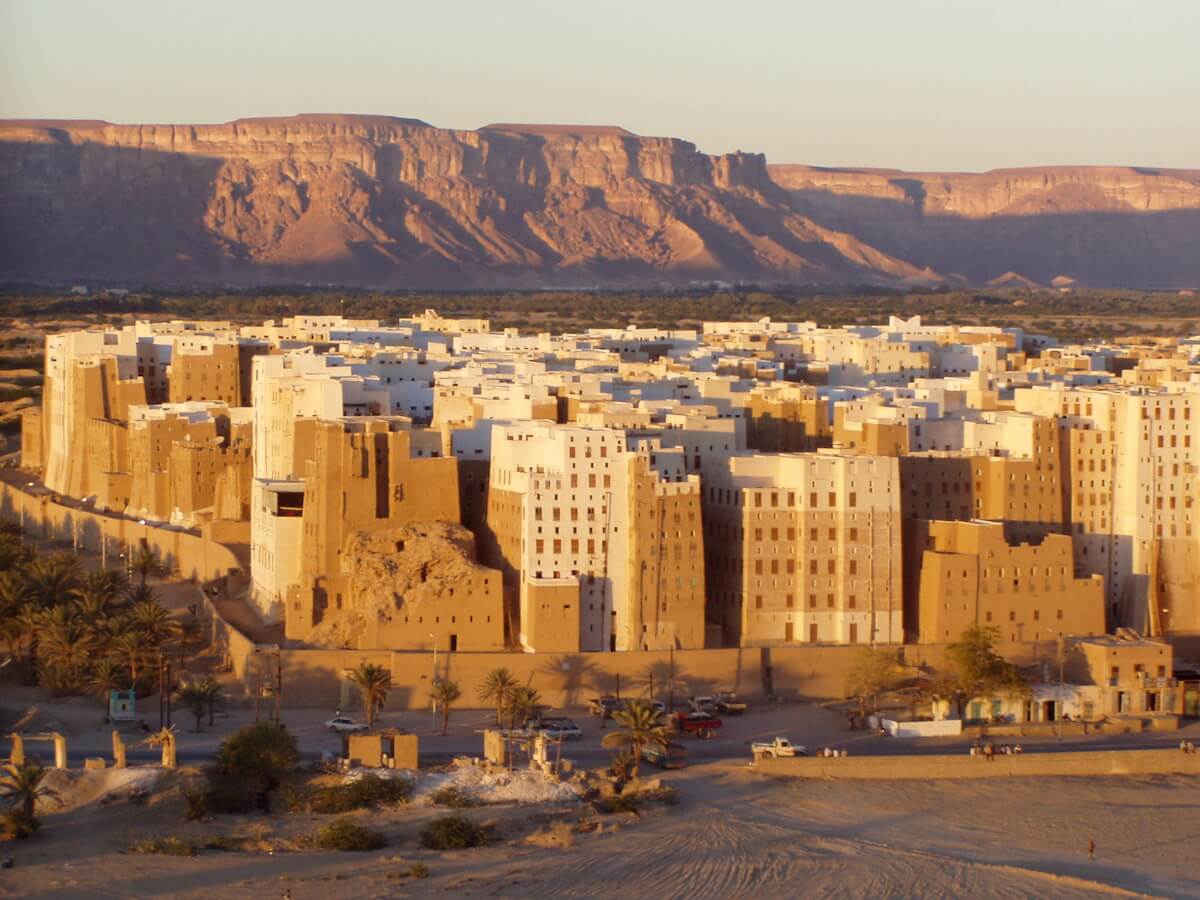 Shibam (Yemen) – the Manhattan of the Desert.

In terms of natural human social organization, people like to live near other people. Ancient cities like Pompeii were prime examples of the human desire to pool resources – to have everything close at hand and not live too far from one’s place of work. Nowadays, we would refer to this kind of urban organization as mixed-use zoning.

However, the car changed all of that, wedging long commutes between dedicated residential, working, and shopping areas. It also changed the spaces between houses, filling them with car-packed streets and pushing pedestrians onto thin sidewalks. The car enabled people to live in larger houses away from the cities but at the price of less social interaction and more time isolated in a car.

Low-density suburban sprawl is not a sustainable model of human habitation. Recognizing this, many car-based cites are returning to the human-focused model. More and more people are returning to cities to live, work, and shop in mixed-use areas. Even mixed-use buildings are becoming the norm and, someday, inter-connected structures may create cities in the sky with direct building-to-building travel. This idea may actually find its origins in ancient cities like Shibam (Yemen) – the “Manhattan of the Desert” – where people still often travel across the roofs of 5-to-8-story buildings instead of using the street. It’s also a good example of mixed-use buildings: the ground floors are often used for keeping animals. 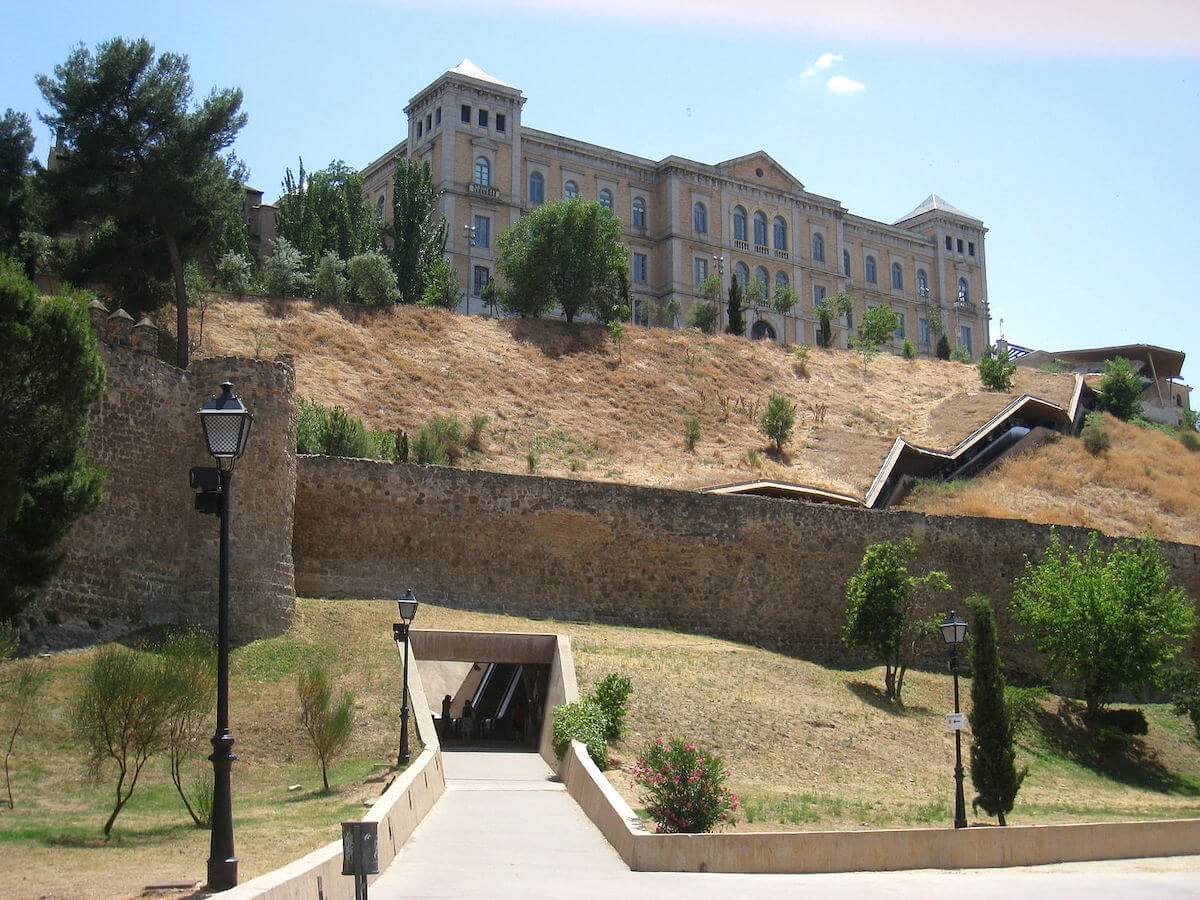 Viewed from a distance, ancient cities always revealed what was most important to them. Walls and fortifications reflected power and authority while large cathedrals or mosques reflected the importance of religion. 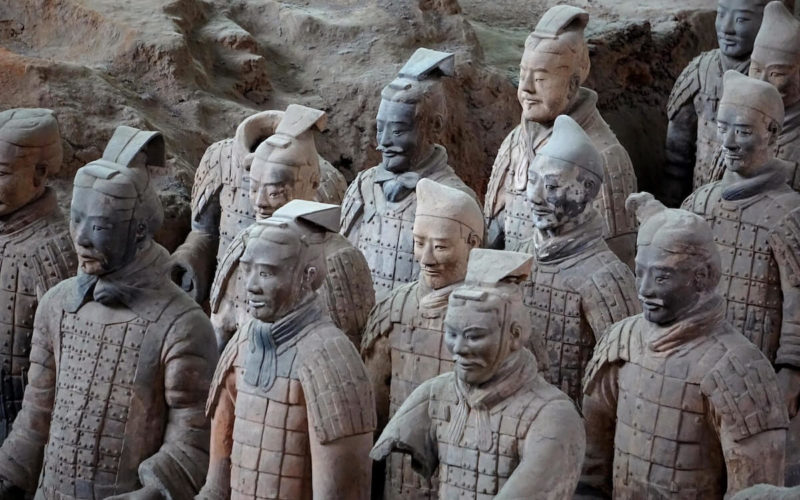 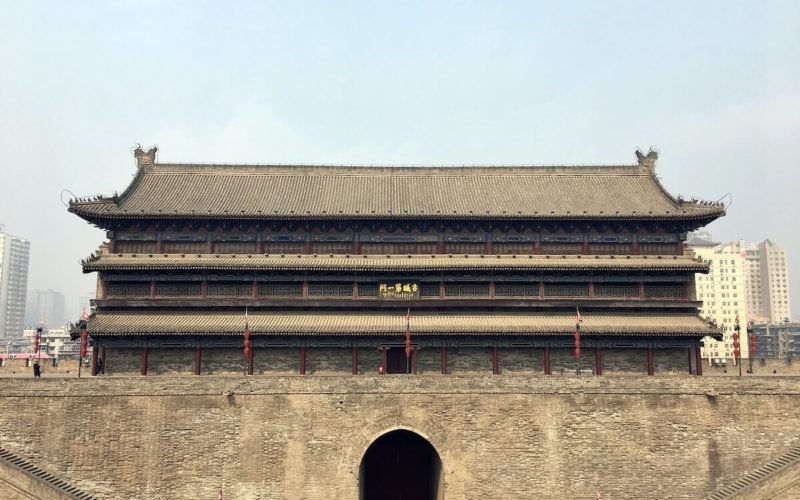 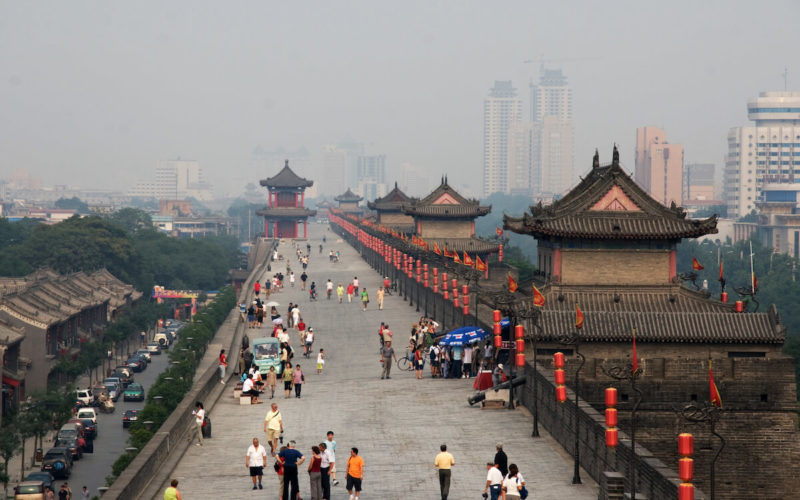 Old Xi’an said “Beware” with its wall and terracotta warriors.

To the ruling class of ancient cities, those walls and fortifications were symbols of power but to the people living there, they meant something different: protection. Some city walls remain today but they are merely for decoration. In fact, the city wall of Toledo, Spain, has escalators to ensure its preservation by preventing it from blocking the movement of people.

Still, cities today need to find other ways to ensure that their inhabitants feel safe. Just like the fortifications of ancient cities, people’s perception of safety is enhanced by visual reassurance. That can be delivered by cleanliness, general orderliness, and a good, helpful, but not oppressive police presence.

People also need (safe) public places to interact. The big squares or marketplaces of old cities not only ensured direct interaction among merchants, farmers, and consumers but they also provided space for social interaction. Cities that have fully adapted themselves to cars have tried to make up for the traditional marketplace with malls, but these cannot replace the around-the-corner experience of a public square, full of local people, businesses, and pop-ups. 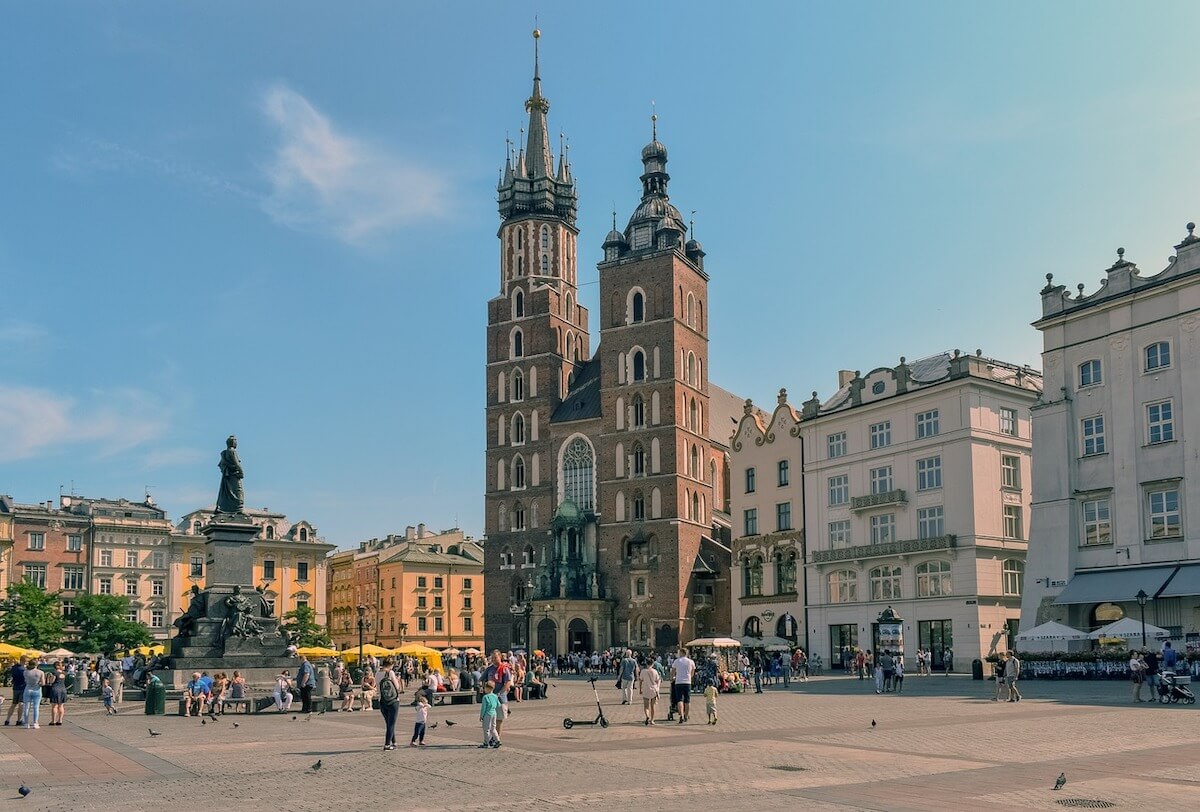 Kraków (Poland) – town squares are the heart of pedestrian life.

A study2 of 20 ancient Mesoamerican cities looked at the relative success of cities run by despots with a high concentration of wealth and compared that to cities with a more collective approach to governance and better distribution of wealth.

They found that the collectively governed cities with a more equitable wealth distribution consistently showed better long-term success and greater competitiveness when compared to the authoritarian-managed cities.

In general, history also teaches us that it’s important to be tolerant. Repression almost always leads to massive underground resistance. This happened in the most literal sense in Derinkuyu, Turkey, a huge underground city, which is thought to have been used by Christians in hiding. It is the deepest of dozens or perhaps hundreds of underground cities in the Cappadocia region of Turkey. 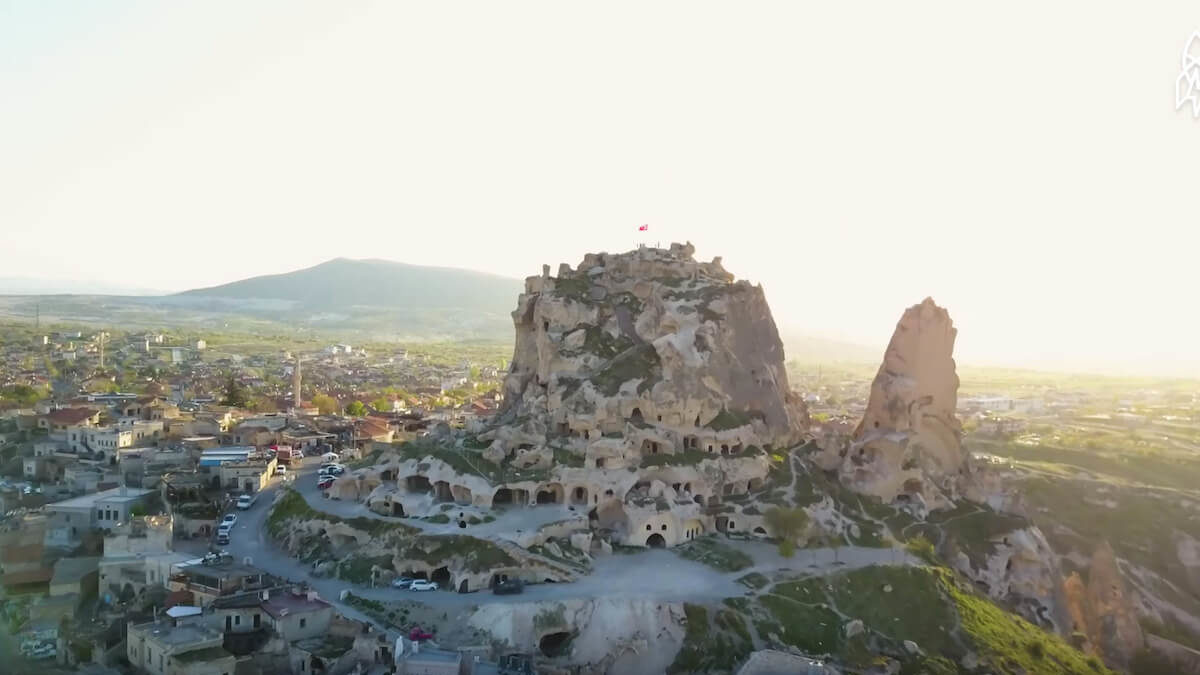 Beauty attracts us all

Beauty is a trait shared by nearly every ancient structure that has survived into modern times. Of course, many of those ancient structures were built to show off the grandeur of some conceited king, but after the years go by those old monuments and buildings always become a source of local pride.

This should be considered a lesson for urban design today. It may be costlier and more time-consuming to create buildings, parks, and monuments that enhance the appearance of cities, but they add a certain flair and help make great cities just a little more special for everyone who lives there.

One way of ensuring beauty in modern cities is to protect or adaptively reuse older structures. Old buildings and monuments greatly enhance a city’s beauty and may even boost tourism. Historic buildings contain stylistic features that would be cost-prohibitive nowadays and help ensure the variety that makes cities more dynamic.

Of course, not everything was perfect in ancient cities. There was ancient Rome’s gladiatorial combat and the Mayan’s human sacrifice really wasn’t cool at all. But there are many lessons to be learned from the ancients. Perhaps the most important lesson from these car-less societies is that we must always build and design our cities with a primary focus on pedestrians. If you add to that a strong focus on the environment and happiness, then all the rest will fall into place. 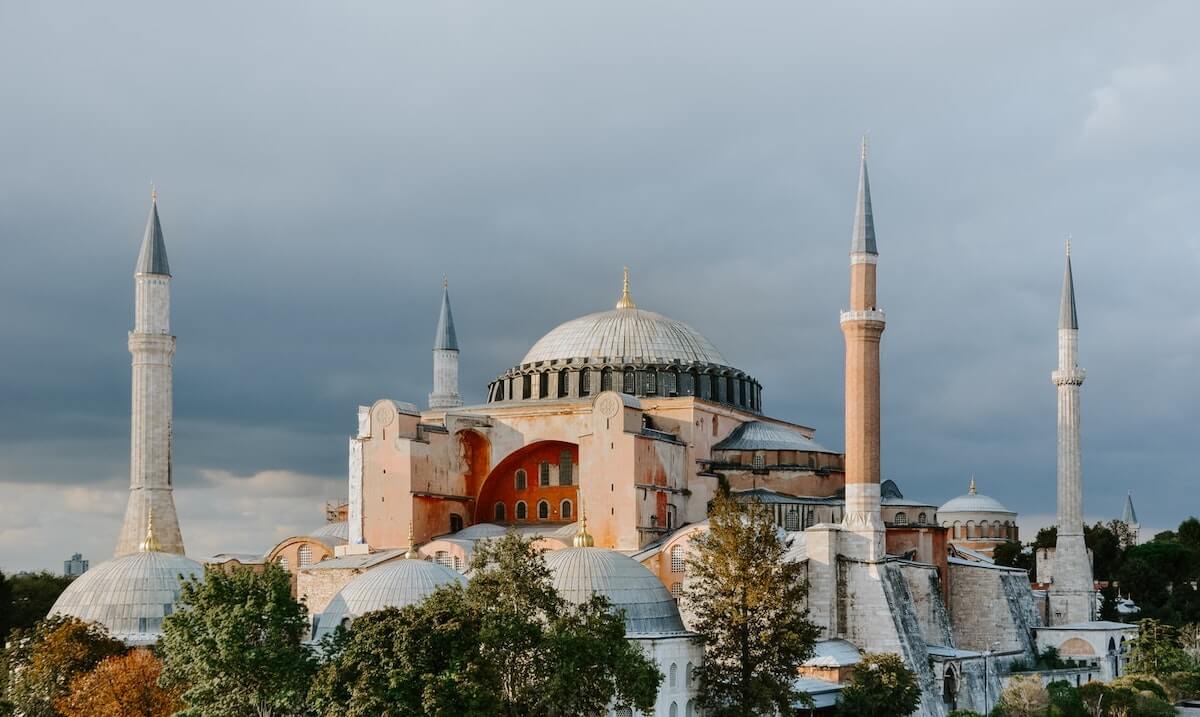 The Hagia Sophia from 537 AD is enjoyed as a museum today.

Ancient Baghdad, taken from the book The thrones and palaces of Babylon and Ninevah from sea to sea; a thousand miles on horseback. by John Philip Newman, picture via commons.wikimedia.org