Can buildings help fight climate change? Of course they can. With buildings still generating the largest global share of energy-related CO2 emissions, they can, at the very least, reduce their negative impact. Many real buildings and futuristic design concepts go further by making a positive impact on the environment, whether by generating more energy than they consume or by doing something unexpected like actively cleaning the air.
Reinventing the sports stadium

Architecture that moves with the times

What is architecture? Is it static, unchanging structures that fight against the elements to provide humans with shelter? Not anymore. The best architects have done away with the idea of creating buildings that disregard the local climate.

Buildings are starting to work with the environment, not against it. And many of the latest trends in building energy management involve unexpected design elements and techniques that upgrade the energy performance of a building, improve user comfort, or provide some other benefit to the local environment.

One architect who is fundamentally questioning the role of architecture is Philip Beesley. His “Hylozoic Ground” installation may look more like art than architecture, but through this works of art, he is actually exploring ways for buildings to react to their occupants’ needs, clean the air, and express care for people’s well-being.

Wind turbines on buildings – and between rotating floors

We all know about solar energy, but why not harness the wind? Many new tall building designs are beginning to integrate wind turbines, predominately as a visual statement of the building’s green image. Despite the fact that turbines on buildings are rarely high enough or large enough to deliver a significant amount of energy, the concept still holds a lot of promise.

In fact, one of the most groundbreaking designs looks both promising and attractive. The “Rotating Tower”, designed for construction in Dubai, involves the integration of horizontal wind turbines within small gaps between each level of the building. But that’s not all: Every floor of this building will be able to rotate independently of the other.

Although this rotation may seem like a gimmicky waste of energy, the fact that every floor is an independent unit helps create a crucial bit of space in between each level for both wind turbines and solar panels. If built, the Rotating Tower is expected to provide a surplus of energy that could power up to 5 similarly-sized buildings. 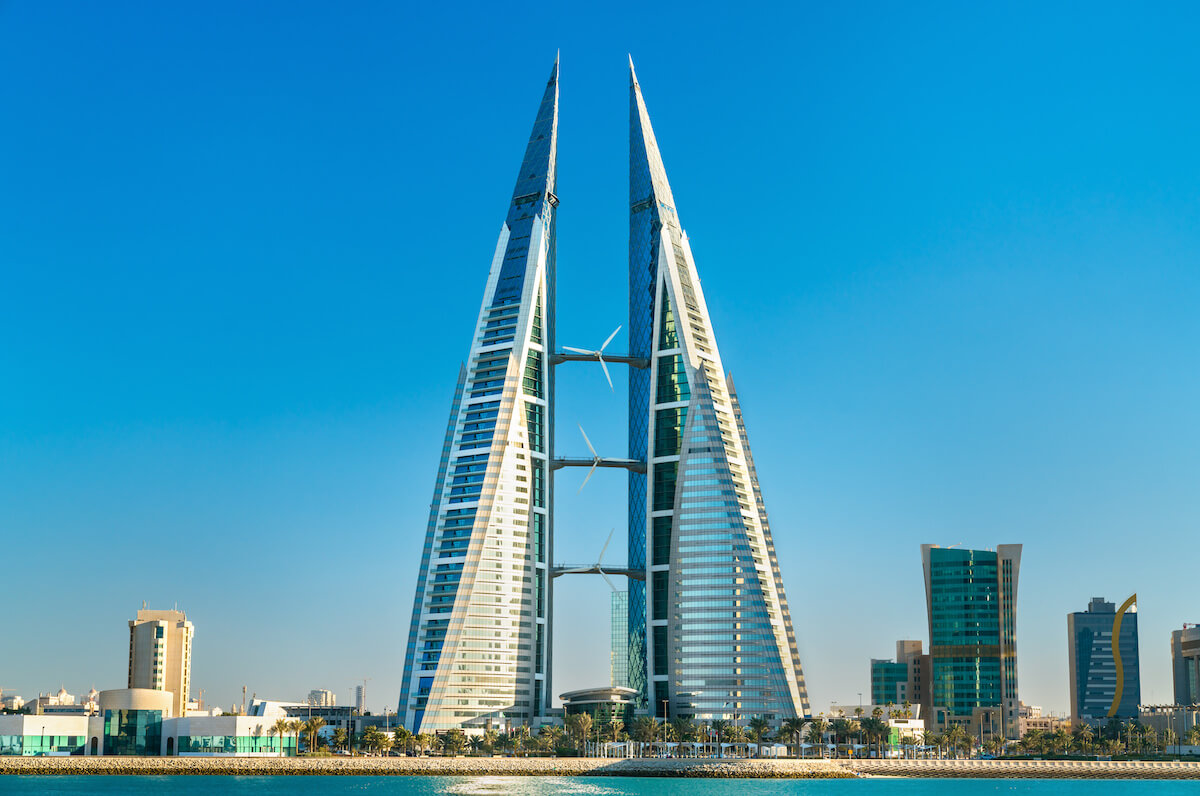 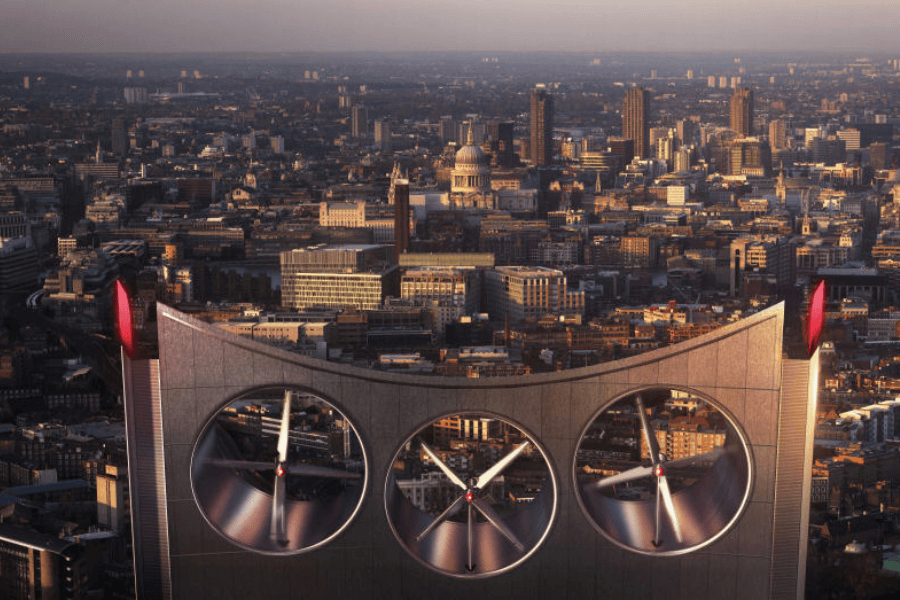 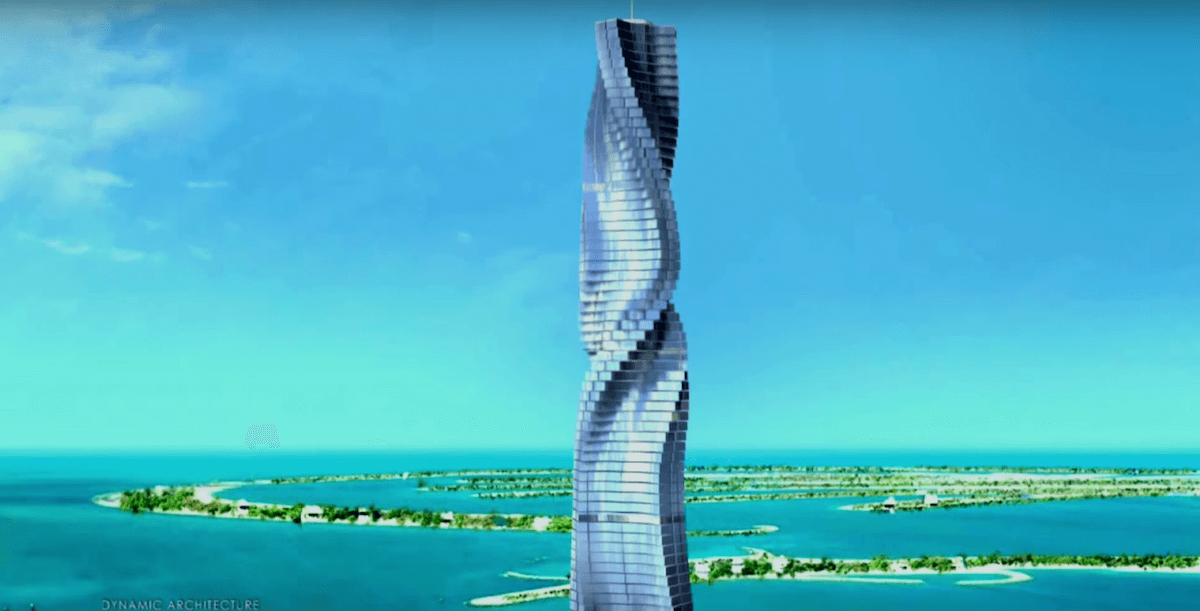 A building that cools and cleans the air

One of the best-known ways to do this is to add greenery on the roofs, walls, and interiors of buildings. The Bosco Verticale in Milan, Italy actually supports enough greenery to equal 10,000m2 of flat forest land.

Apart from the use of greenery, Klaudia Gołaszewska and Marek Grodzicki’s Airscraper – which took 2nd place in the 2019 eVolo Skyscraper Competition – draws in air at ground level and directs it up a chimney that runs through the 800m building’s core. As it travels upwards, the air is filtered and cleaned. The process also helps mitigate the heat island effect at street level.

Many new technologies employ the innovative concept of “breathing walls,” such as in Philip Beesley’s “Hylozoic Ground” installation. Breathing walls use special coatings or concrete to absorb carbon and human-generated pollutants. For example, the Manuel Gea González Hospital in Mexico City has a titanium dioxide coating that “eats” smog and counteracts certain elements of pollution. And there’s also the Palazzo Italia in Milan, which uses a smart concrete that harnesses solar power to break down harmful pollutants. 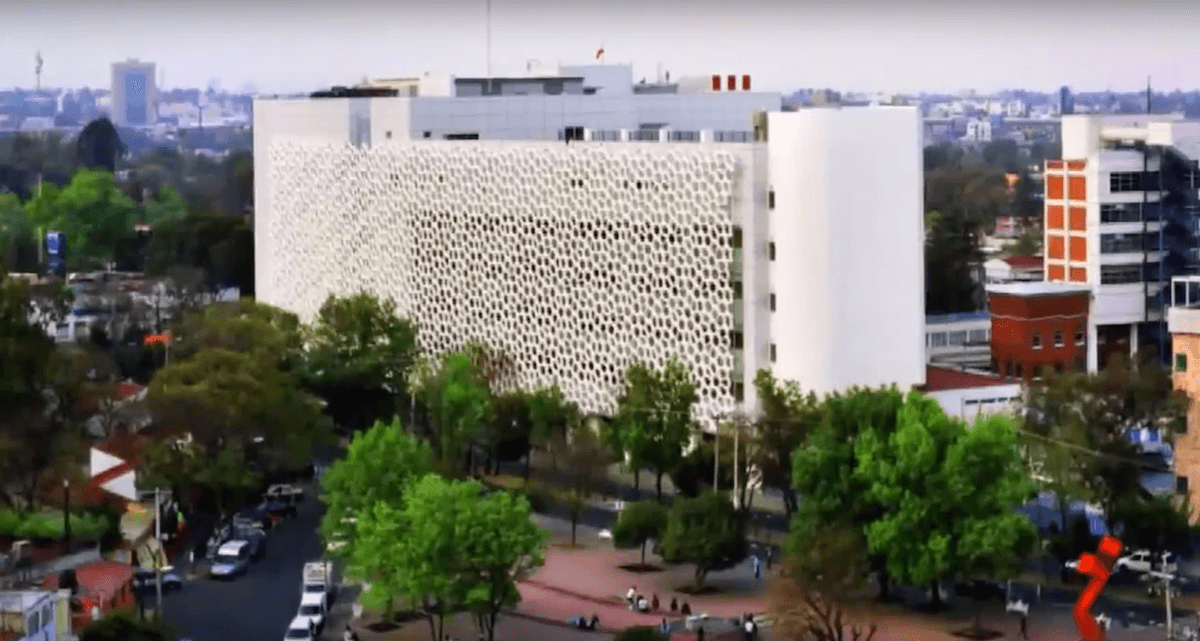 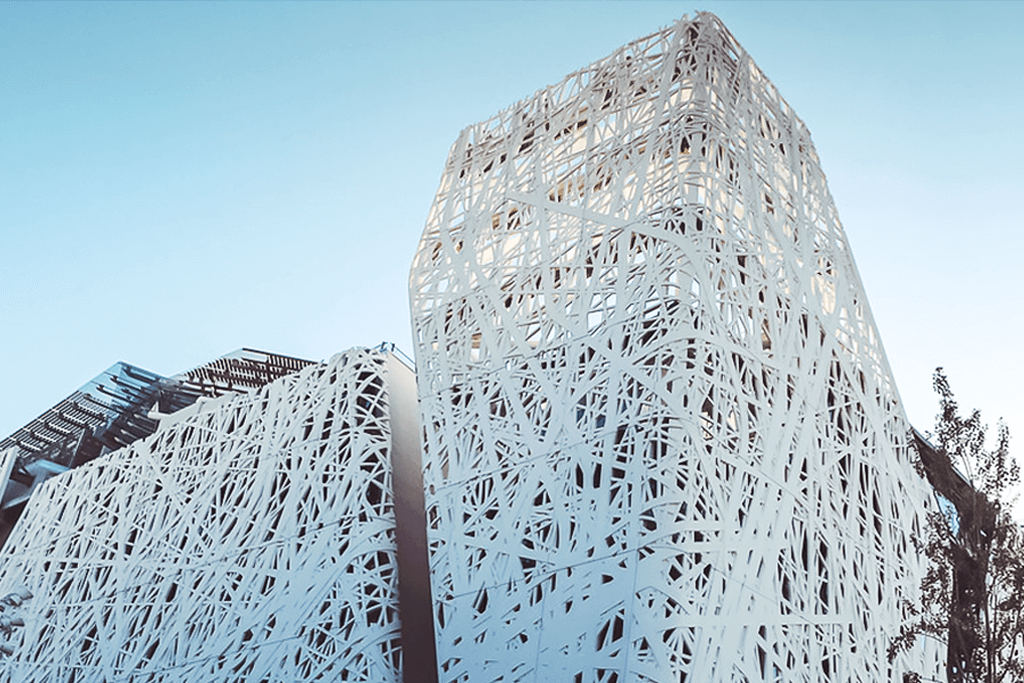 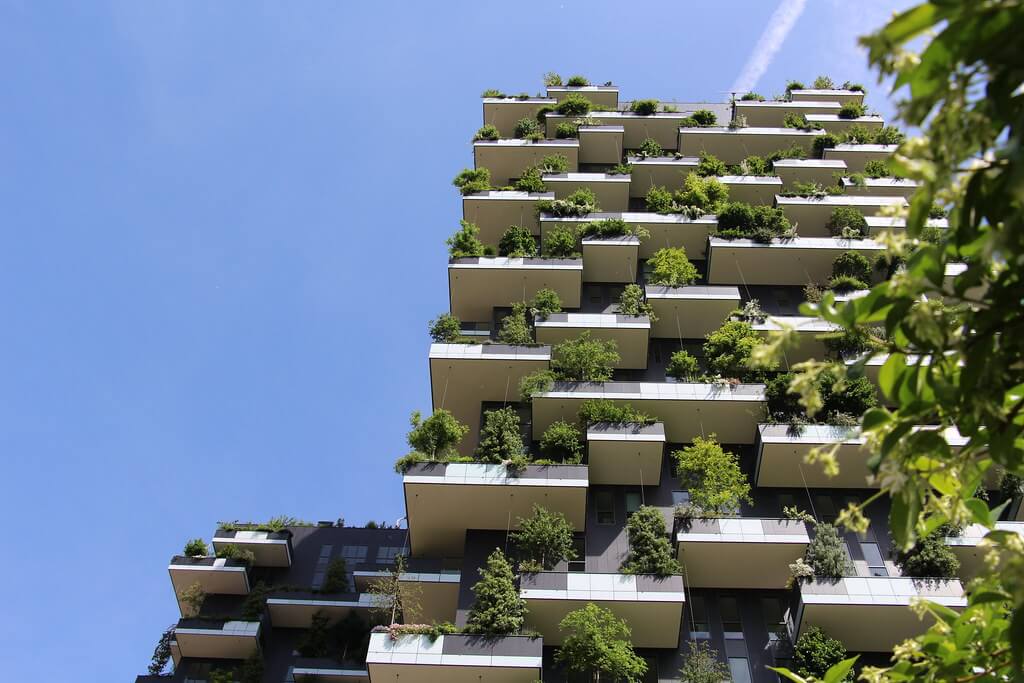 If the façade is the “face” of a building, shouldn’t that face be able to move? We can move our eyelids to adjust to light, our skin helps us cool off, and our noses filter the air – it’s not surprising that building façades can do all that and more.

The Syddansk Universitet in Kolding, Denmark features a climate-responsive kinetic facade that regulates interior temperatures with approximately 1,600 triangular metal shutters that automatically provide the right amount of light to either shade or heat up the interior. Meanwhile, the responsive shades of the Al Bahar Towers in Abu Dhabi also open and close to reduce heat gain by up to 50 percent.

Responsive design can even improve a building’s environmental performance by actively regulating the exterior spaces that surround a structure. The giant sunlight and temperature-responsive umbrellas at the Medina Mosque in Saudi Arabia help regulate heat in surrounding courtyards. This primarily improves comfort for visitors who come to pray, but it actually reduces cooling needs inside the building, too. In the winter, they reverse the process by letting the sun warm up the courtyards by day and then opening the umbrellas to help retain the warmth overnight. 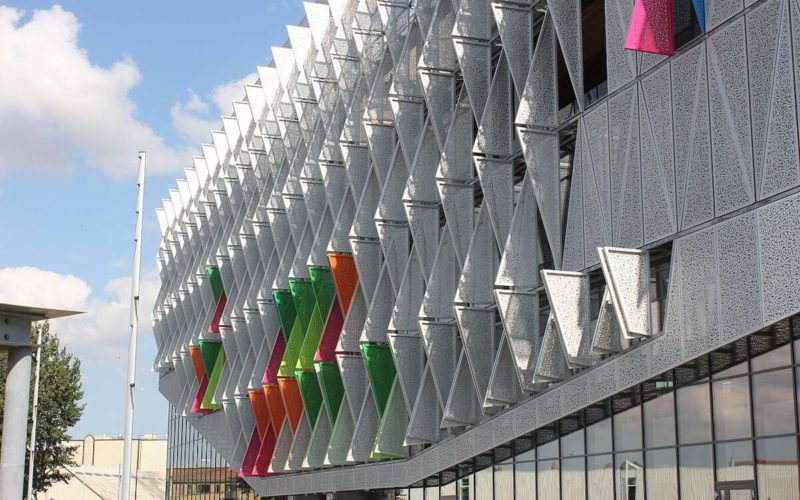 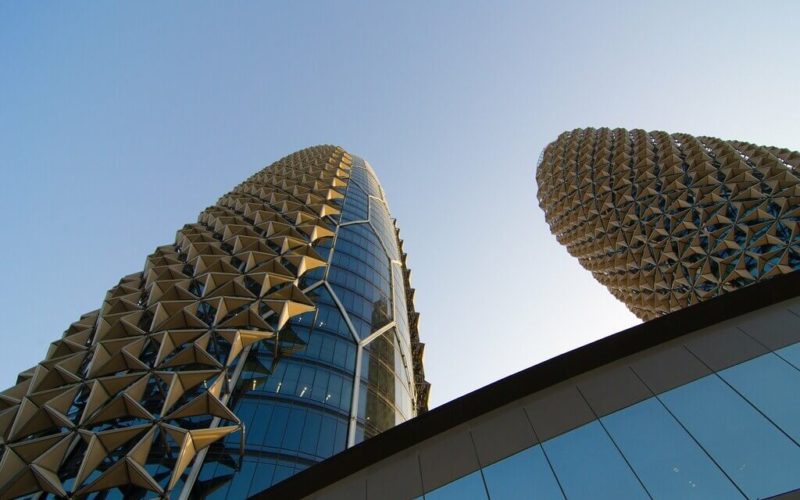 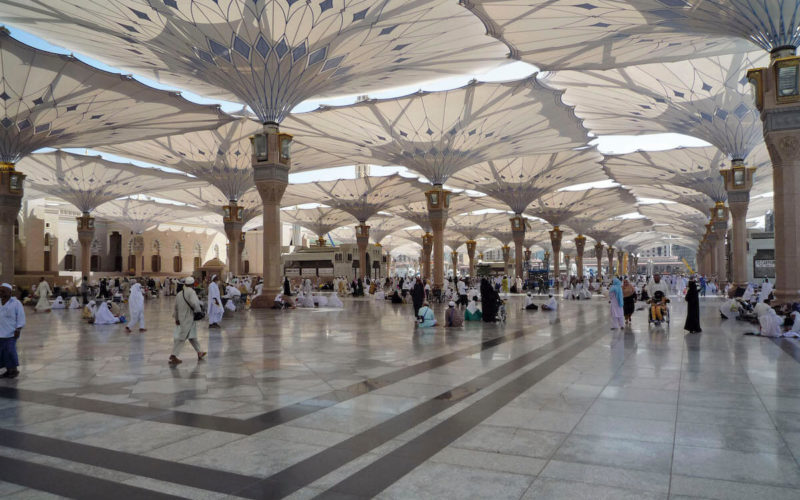 Buildings that dress for the weather

Textiles also offer many advantages to buildings. Semi-transparent textiles can reduce solar impact without blocking views. And due to their lightweight, they are also a good choice for moving elements such as solar shades. Other applications allow for façades to move with the wind and even generate electricity through integrated piezo moduli.

The fiberglass textile skin of the Sedus Stoll research building in Dogern, Germany allows the building to appear as a white monolith by day or a ghostly specter by night, but it can also open up for a clear view of the windows – and it improves the building’s overall energy performance.

The fiberglass façade of the thyssenkrupp Elevator Test Tower in Rottweil, Germany increases in transparency as it ascends, while its spiral shape significantly improves the tower’s vibration behavior. 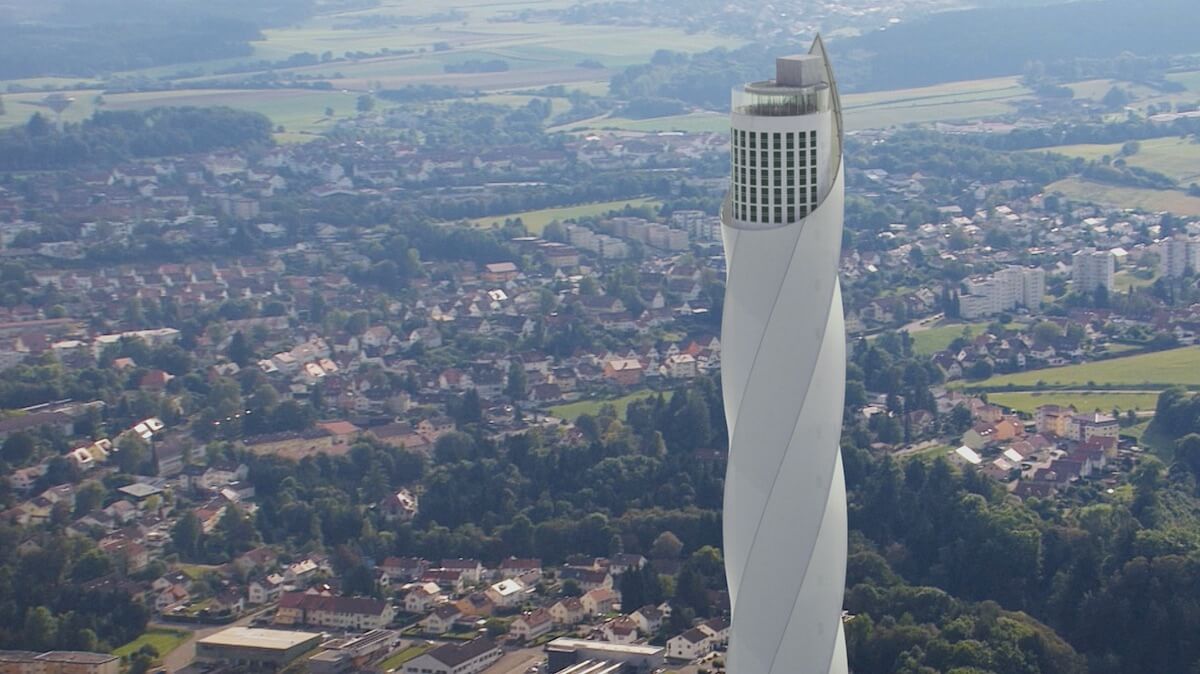 Currently, the majority of environmentally-friendly design work is flowing into one-off lighthouse projects that generate a lot of media attention. If buildings are going to make a real impact, green building practices must become much more ubiquitous. That is, companies should design all of their buildings to the same high standards of their green headquarters.

Architects and building owners need to know that things like net-zero elevators and photovoltaic glass actually exist. Not every building can be net-positive (e.g. historic structures), but it is possible to build enough net-positive and net-zero energy buildings to offset much, if not all, of the negative impact of the overall built environment.